The Numerical Lifting-Line Theorem (NLLT), also known as the Prandtl Lifting-Line Theorem is a set of functions that are designed to solve for a wing geometry’s: circulation, downwash angle of attack, lift, and induced drag. The theorem uses the concept of circulation which was originally derived from the Kutta-Joukowski theorem. The NLLT in this report was applied to 3-D finite wings with rectangular, tapered, and elliptical shapes with a constant wingspan area in order to study the aerodynamic properties of varying wing geometries.

In order to model the Numerical Lifting-Line Theorem, MATLAB 2017A by Mathworks was utilized. Two main script files were generated; the first script is a function designed to take wing geometry inputs and plot the output properties, and the second script is the main algorithm saved as a function to be dynamically called by the first script. The data was then tabulated and plotted using Microsoft Excel and MATLAB.

The computational process of the NLLT begins by initializing a matrix of center point and horse shoe endpoint values given the “n” input condition. Cosine spacing was used and a respective angle of attack was solved for given the position on the wing and the linear twist angle. Cosine spacing enables the algorithm to more accurately calculate the wing aerodynamic properties in areas of high rate of change – the root and tip of the wings. After the initiation of the chord, twist, and alpha, the Kutta-Joukowski lift theorem and Biot Savart laws were coded in as the A, B, C, k matrices and the ωn and α­induced matrices respectively. Finally, lift, drag, coefficient of lift, coefficient of induced drag, and the error value were calculated again using the Kutta-Joukowski lift theorem. Data for the local lift coefficient, total lift coefficient, total circulation, and induced drag coefficient was tabulated and plotted for post processing. The MATLAB script takes the wing geometry inputs and does a function call to the second file, a function file, to do the calculations. The data is then tabulated and sent back to the script for graphical and debugging processes.

From the computed data, it was determined that the there was a significant correlation between the number of points tested and the delta margin. For example, when looking at the elliptical wing δ, at n=2 the delta was -0.2338 but at n=128, the delta was reduced to 0.0556. The lift and induced drag determined from these runs are also vastly different but the trend observed was that as the number of points sampled along the wing increased, the output values would converge to a finer value. It was also observed that the rectangular wing had the most consistent Γ and C­­li/CL­ distribution being roughly a quarter circle. The tapered wing had the highest Γ closest to the root chord but the greatest lift local coefficient was found to be at a quarter of the length of the wing from the root chord. The elliptical wing lift distribution has an undefined point at the total spanwise function and the lift coefficient approaches positive infinity. This behavior is expected due to the wing geometry. The untwisted elliptical wing was observed to have a local and total lift coefficient equal to each other thus creating a ratio of 1. This was consistent until about 85% down the span of the wing. By the theory, the elliptical wing should have the lowest induced drag of the three wings, but this condition only applies when the coefficient of lift for all the geometries are consistent. Overall, the results agree with the theory of wing geometries and their aerodynamic performance and the code is robust to evaluate multiple wings with different conditions. 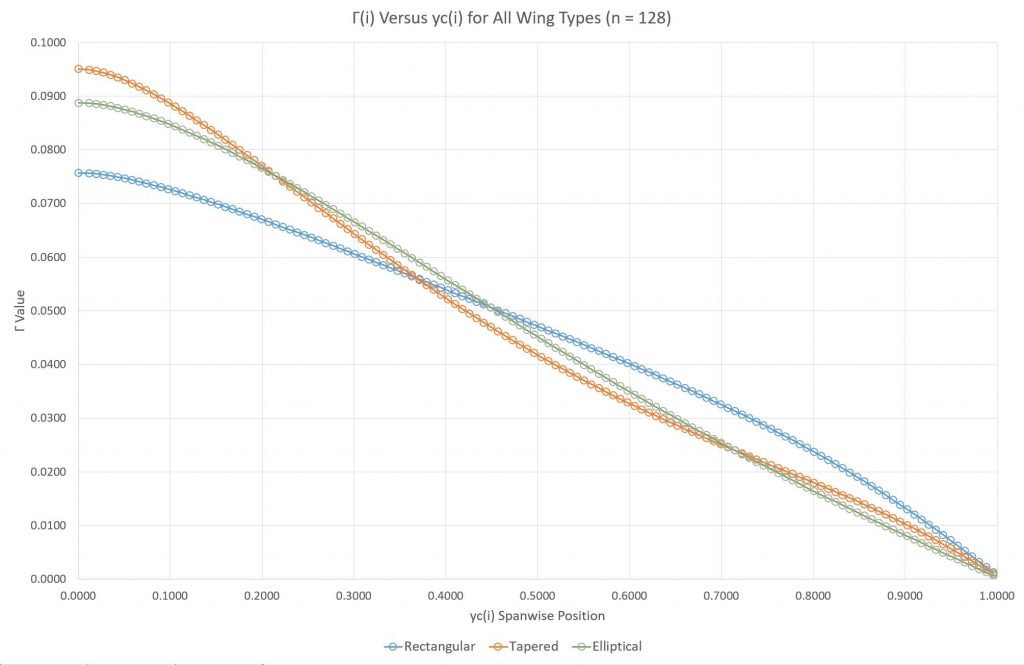 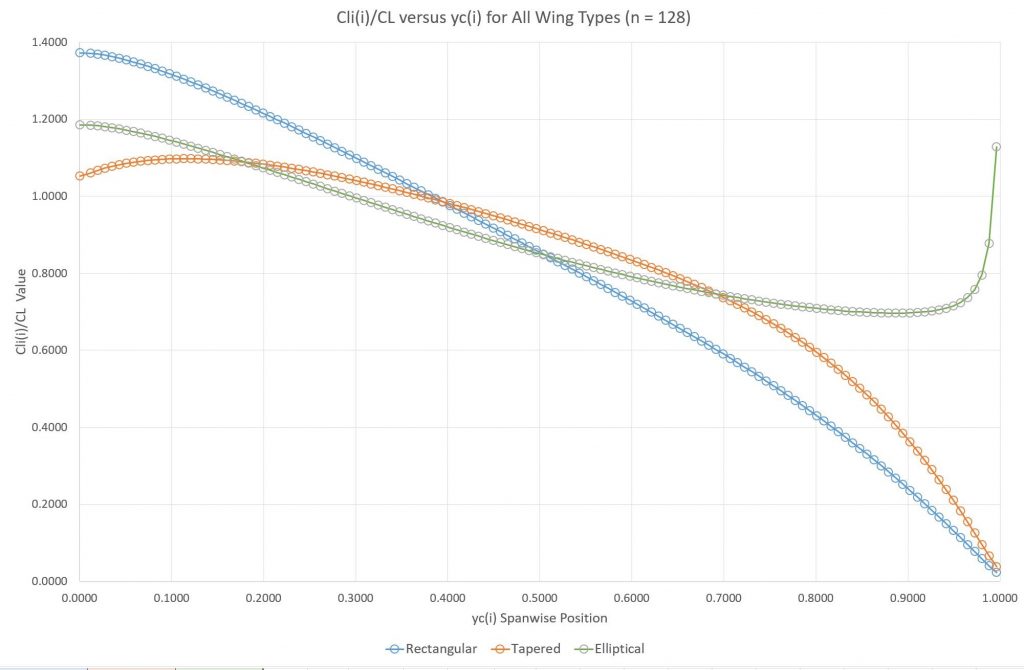 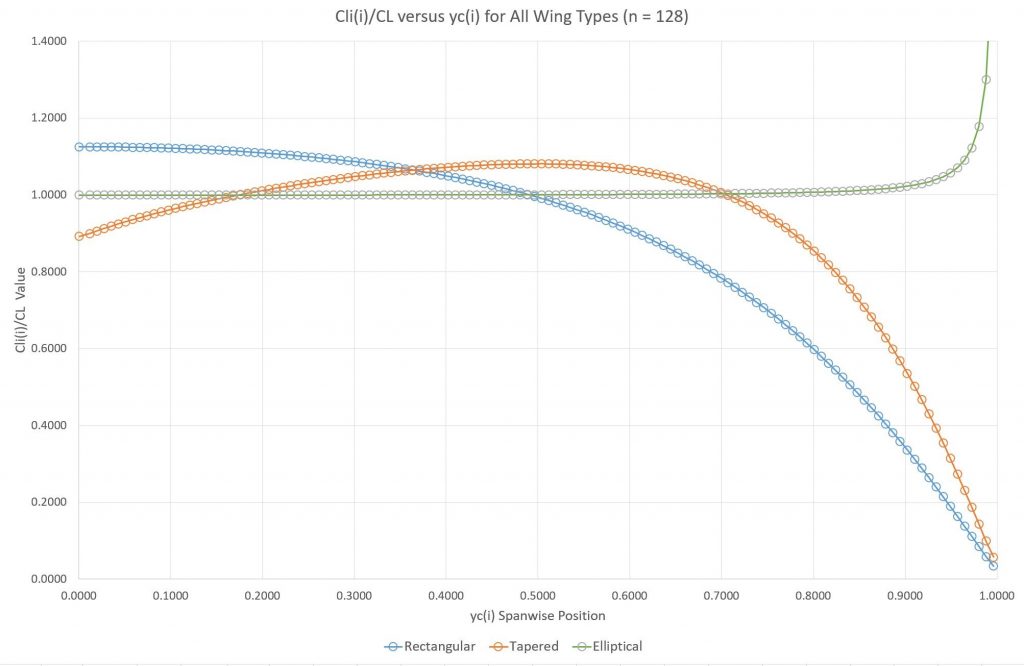 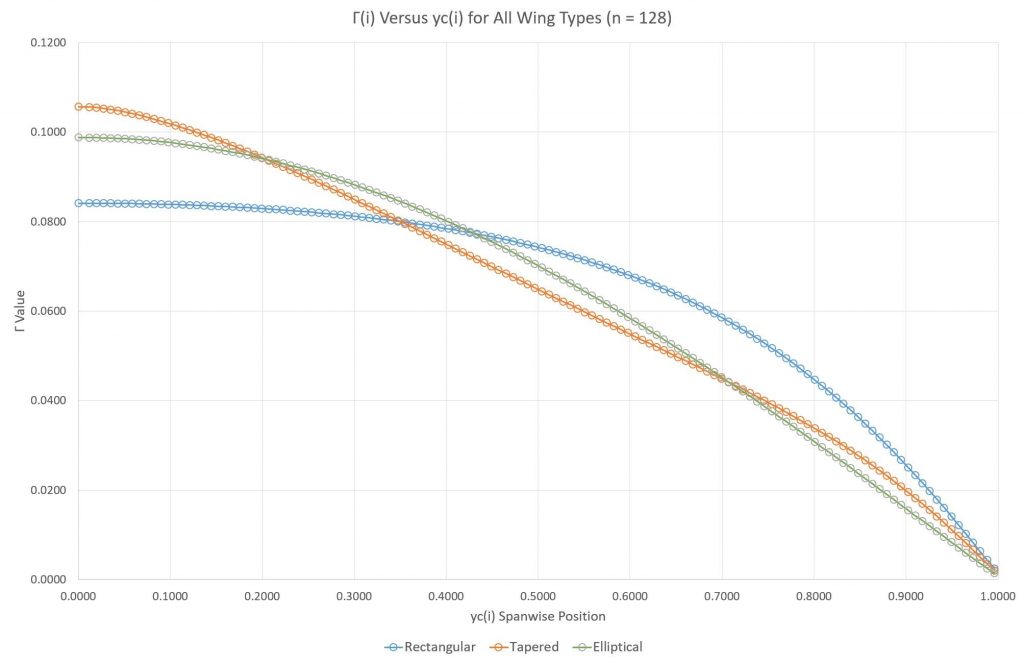 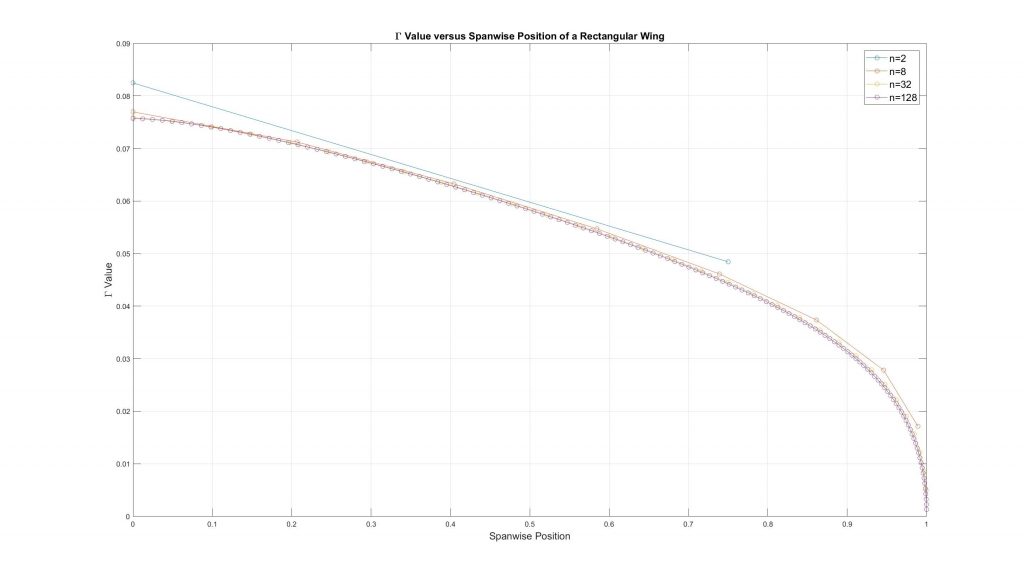 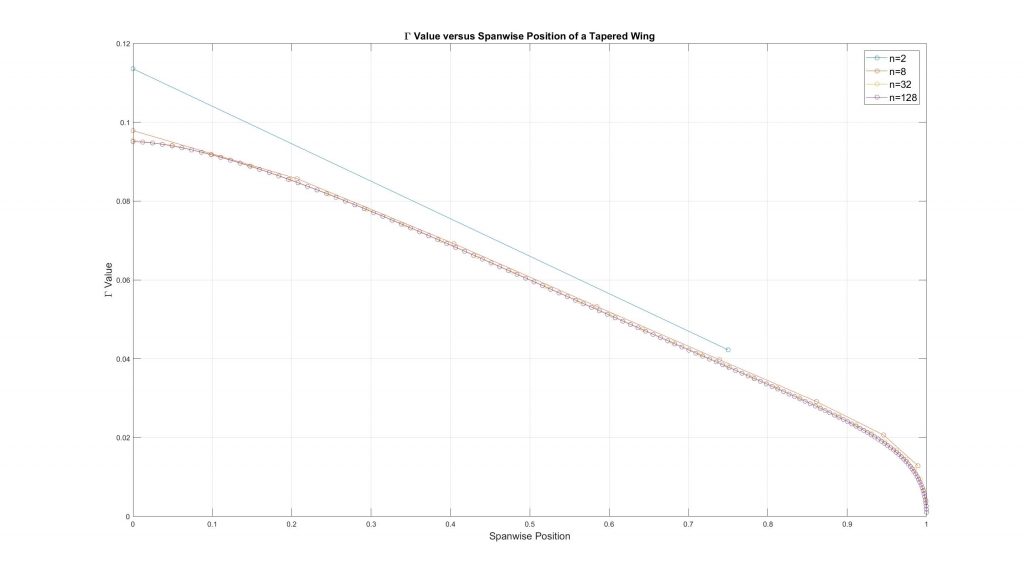 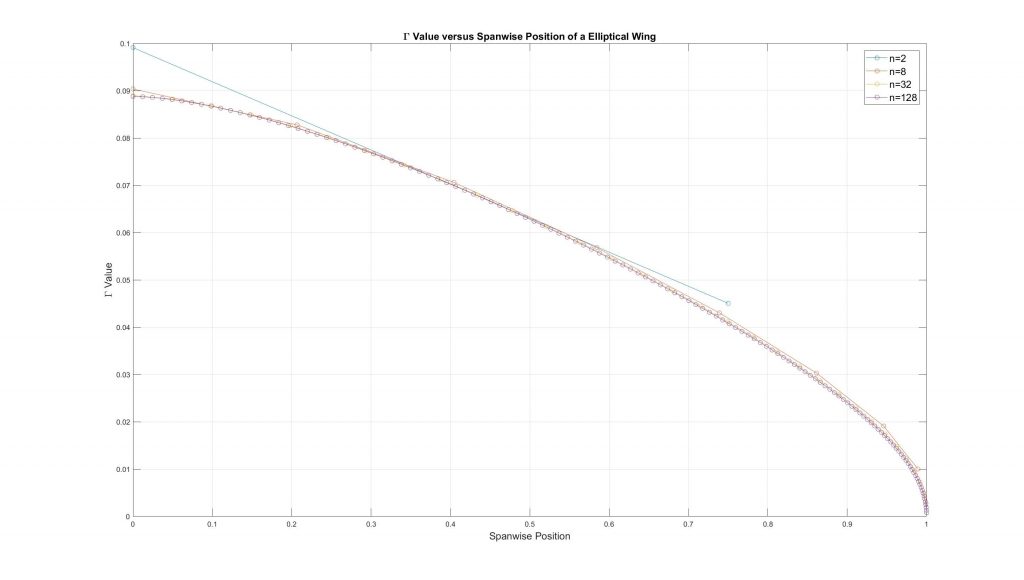 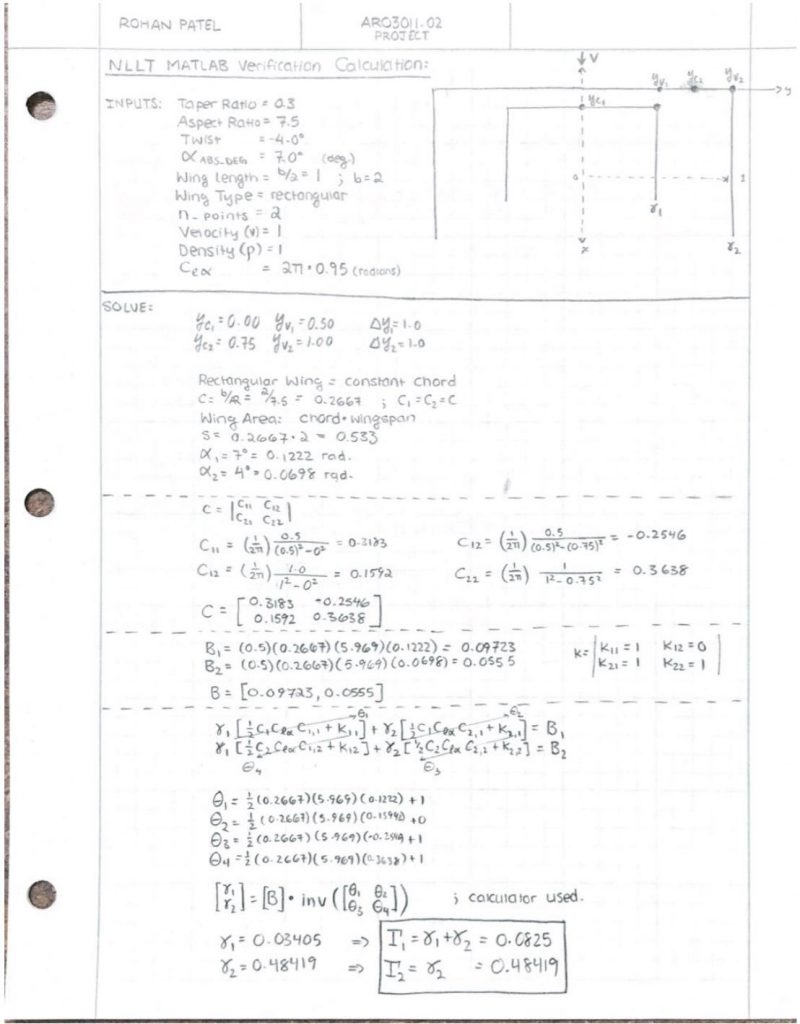 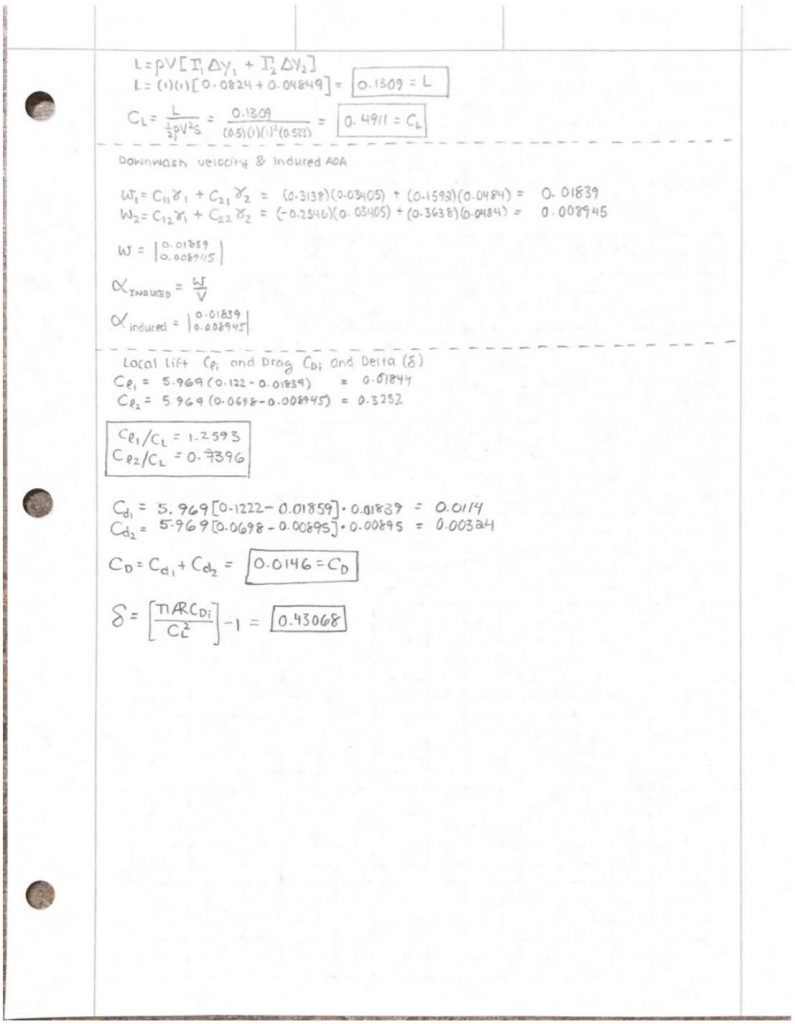